Art Everyday Month Day #18, there’s no age to be an Artist

Today will be a quicky but I really really want to share with you a little sketch I did.

As I told recently on my Facebook page, we (my Husband and I) attended an information session for the Fort Langley Fine Art School, which is a public school going from Grades 1 to 12, focused on «infusing art in everything». They have four major areas: visual arts, music, dance and drama. The first years, kids learn a bit of everything before choosing a major in Grade 8.

Both our girls would love to attend an art school and this one would fit almost perfectly.

The Vice President told something that is still in the back of my mind, about going into the hardest and less comfortable areas the kids are in, and pushing them to go further inside of it. (i dont recall the exact words he said, sorry). And I took it as my Oracle for the day.

Koala is drawing all the time (when she is not dancing !). It’s not just a rethoric way of saying it. She draws more than me. Always with a pen in the hand, drawing on everything she finds on her way (I do bind her journals and gift her with some fatter ones as well, though).

I want to practice my more realistic faces, just to know I am capable of doing it. Shading is my weakness. Even if I do understand the theory, it usually goes wrong when it comes to doing it.
So I was doing this face in one of my sketchbooks when Koala came and ask if she could draw her hair. Then of course she wanted to add the crown. And some eyelashes. And a body…
Here is this impromptu collaboration between us two: 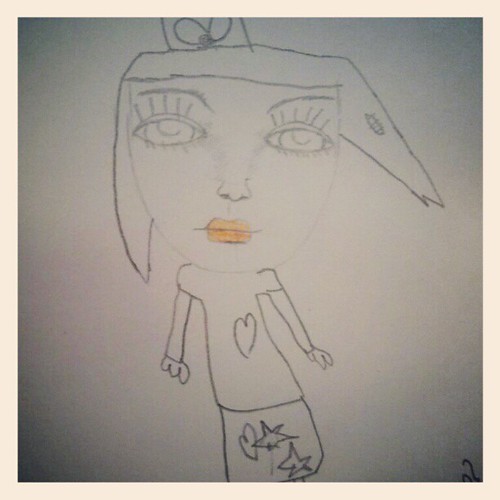 My Truth(s) about sketching

You know how I keep saying this Truth: «I can not draw». I were never able to draw anything near to realistic, and kept holding on that. Not that I don’t feel down when someone I don’t know thinks one of my painting was made by my 7 or my 5 year old kid, but this was my Truth: «I can not draw». So for years I have been making the most of it with my Nixies and other Sprixies, and love it. 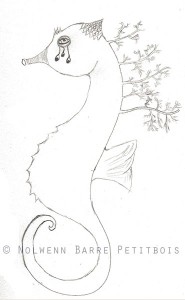 However, since I have been diagnosed with fibromyalgia in the summer of 2011, I am not able to paint every single day like I used to. So my alternatives are doing something in my art journal (because I can do that on my couch), and since not so long ago, keeping a sketchbook. Isn’t it paradoxical to use a sketchbook when you don’t draw ? I thought so too, to be honest with you. But I went for it anyway, because I am the kind of person to always push the limits further.

As I’ve told you, I have been experiencing quite a big existential crisis about me, about who I want to be as an artist, about the fact that «I am not there yet». Knowing where you want to be in your professional career but not seeing the steps to get you there is very hard; it is something I have been dealing with for a decade or so (the «there» had changed several times during that lapse).
It resulted in an «empty inspiration well», and me not painting nor doing almost anything in my studio for more than a month. Which never happened before. Never.

Some of the things that are created in my sketchbook are meant to stay as they are: sketches. Some I love more, I carry the hope to give them life on a full painting (if you recall my process, you know that I don’t start a painting with a plan in mind. So that would bring me back in time when I started it all). This is what happened for my OwlCtopus. She was a sunnyafternoononthebalcony sketch, and became a 11×14″ mixed media painting.
I hope that this guy on the left will become a beautiful painting on his own as well. 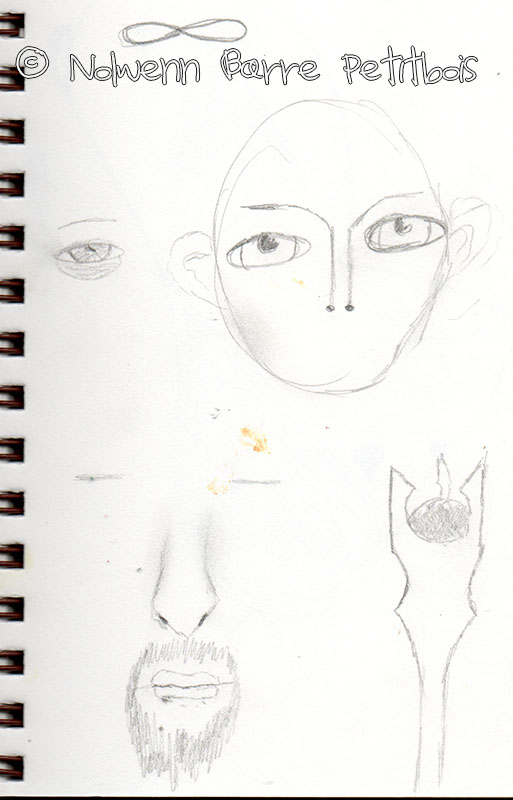 You know what I really like doing ? Sketching while watching TV or while listening to music. I can catch shapes, ideas, faces.
This is when I finally can let go of my perfectionism and just get my hand moving. Not looking for creation anything in particular, just getting it onto the paper.
The sketches on the right were done almost in the dark, while watching The Return of the King (the third installment of The Lord of the Ring trilogy). Yo ucan see how imperfect it is, but i just don’t care, I was looking for a simple sketch showing the bigger eyes on a face, and I loved Saruman’s wand design and I wanted also to see how i could draw a male face, as I exclusively draw female characters for now.

Here are a few other examples of my sketches, just because (click to enlarge): 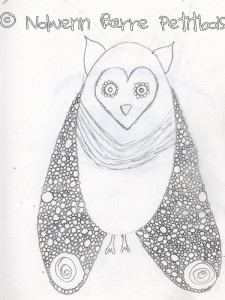 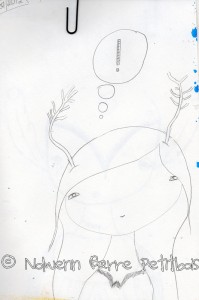 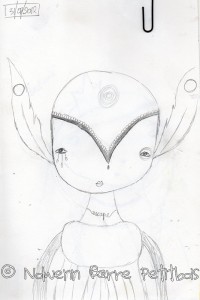 What about you, do you have a sketchbook ? How is it different than you Art journal ?