I am so so happy to introduce you to what makes what seems to me to be a 180° turn. Abstract. No Nixie. No Sprixie. Yes, you have read right.

See, I have been willing to go more abstract for the past year. Because it is something I love looking at from other artists. But me, doing it, was another story. I used to be one of these people thinking «How can a square with a dot in the middle sell for millions of dollars ?» but until you know the artist’s process, who are we to judge. Right ?

I hate wasting my supplies, so I usually use what I call «the end of my palette». When I have leftovers paint on my painting palette at the end of a session in the Studio, I will use it to start (or continue) a page in my Art Journal. But this time I decided «why not actually start a background on a wood panel instead, and see where it leads me», so I played around and loved it too much as it to actually wait for a Nixie or a Sprixie to appear.

As usual, they are meant to be touched, they all have a fantastic texture. And not only the colors tell a story, but each stroke as well.

There will be more to come during this month of July 🙂

I hope you’ll enjoy watching me create one of them: 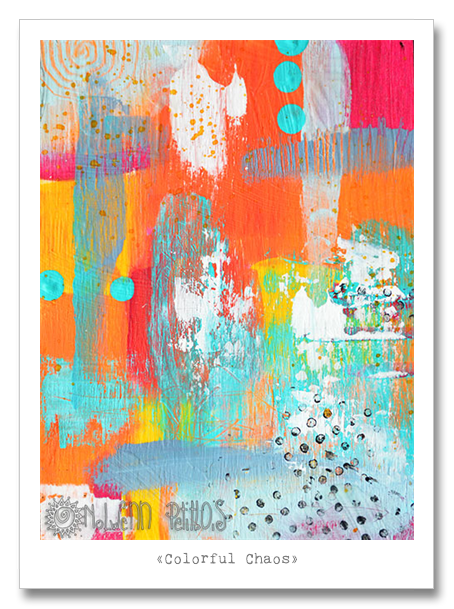 «Colorful Chaos» is in the shop right here. 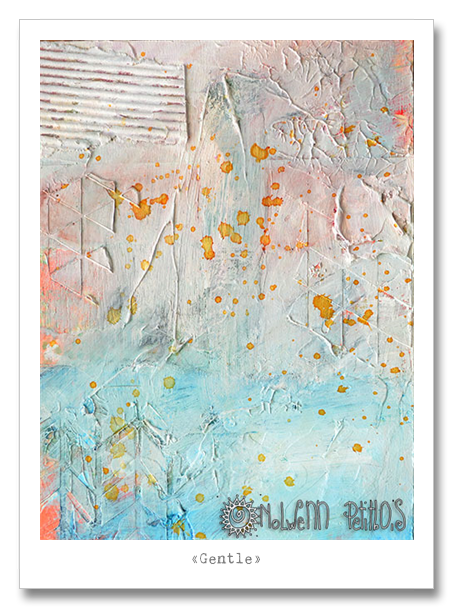 «Gentle» is in the shop right here. 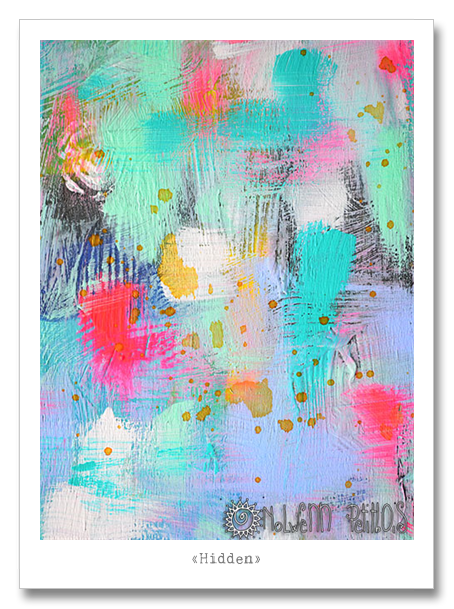 «Hidden» is in the shop right here. 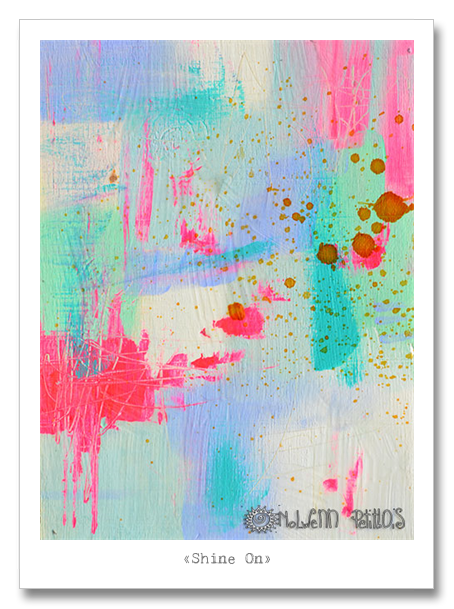 «Shine On» is in the shop right here. 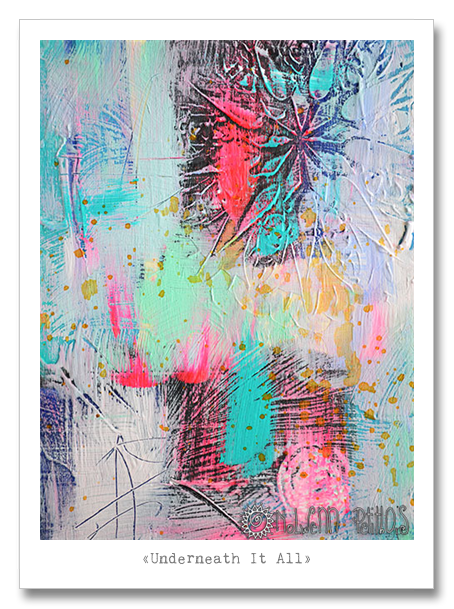 «Underneath it all» is in the shop right here.

Only From The Heart | New Mixed Media Nixie painting

When I’ll finally dare making a video tour of my Teal Studio, you will see how much «old» paintings I have around. Waiting to be reworked.

This is how this painting started. I started by rolling some white acrylic paint over with my brayer, but leaving some of the color showing through here and there. It brings such a good feeling of freedom. Starting anew. 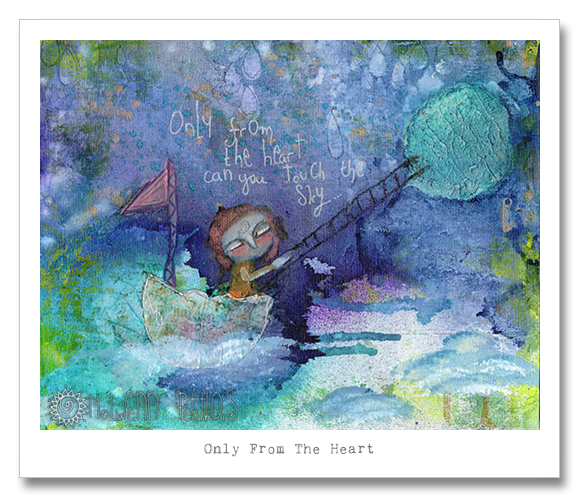 Lately, I have been thinking a lot about where I want to go. With my career as an artist. With my family life. With my body image. Which lead me to this realization: I can get there only by sticking to a CREATIVE DAILY PRACTICE. And with something that feels huge to me: SURRENDER.

This painting was totally me being in the flow and going with what was there, and making it work (any of you who tried to paint over this amazing Midnight color of Dylusions spray knows this is a biatch and so damn hard to do anything on top. Love it, still, but learning along the way. Thanks Samie Kira for the tip ;)).

She was in her boat, and her cloud was actually a wave when I began painting it, but then it became a cloud and then another one appeared, and another one. They are subtle and I like that.
You can’t see, but the Moon is filled with nice silver fine glitter. 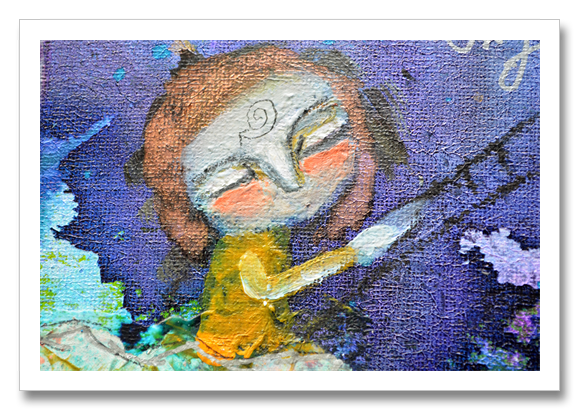 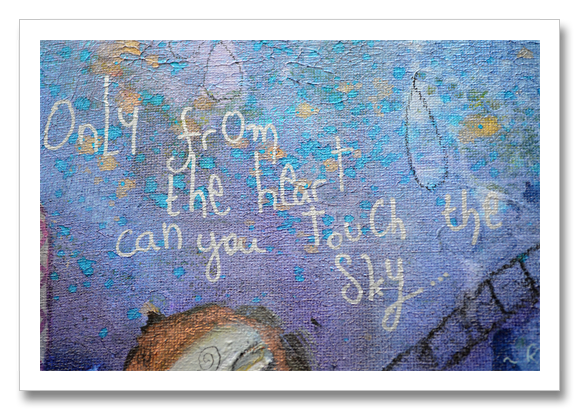 This Nixie is looking for a new loving home: go to my shop for more infos.

Getting out of the comfort zone without a plan, it is all meant to be.

It is not the first time I say you this: since my workshop with Jesse Reno last September, my art took a new turn. For good. You may not see the difference but it is there. No expectation, joy, love for what I do. This is my new creativity recipe to keep me happy and sane.

As I don’t really like pink, this is the same with red. Don’t ask me why because I don’t know. I am just a blue and purple kinda girl… BUT red was calling me so I started creating a background, just feeling it. 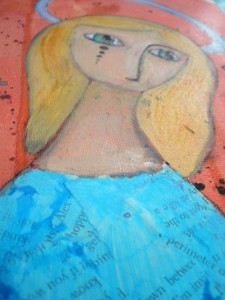 A few weeks (yes… weeks !) later, I pulled it from my «in progress» stash, wondering what the hell I could do from that… And then an eye appeared, and a nose. A VERY long nose compared to what I usually draw, but hey i could not see it anywhere else. And the face was there in front of me.

The pencil was flowing on the canvas without me really controling it. I was just the tool, if I can say so. I was surprised of her features: tall, pretty vertical.

On Monday, a little voice told me to try my luck by calling during John Holland’s radio show, happening via Hay House Radio. If you are not familiar with him, John Holland is a medium. Yep, the crazy people who can feel/see/hear dead people (being sarcastical on the crazy part of my sentence).
I won’t lie, I almost hang out several times, but this gut feeling was telling me to stay… and I was the last person chosen. Of course, I wanted to her from my Aunt who died in 1995. She gave me several messages, it was short (but I was not expecting more from her, knowing she disagrees when I try to communicate with her).
After that phone call, i had to add the «ring» above her head (is there a specific name for that thing ?). You have to know something about me: I am not religious. I was raised as a Catholic but today I consider myself as a Pagan/Buddhist (yes I know. My beliefs are eclectic and do not get trapped in one religion) so this urge to add this ring made me wonder why. But does it really matter to know why ? NO.
I learned to just go with it.
I remember dreaming or waking up at night, knowing what words to put, exactly, on this painting. And of course, I forgot. For once, it is in my mother-tongue: French. «Je veille sur toi. Toujours.» means «I am watching over you. Always.» and I am pretty sure my Aunt whispered this as a reminder (and no, she was not tall nor blonde). I don’t have to clearly talk to her to know she IS there with me, always and until she decides to come back (if she decides so someday).
While I was setting the embossing powder with my heat gun, my older daughter who was writing a letter on the same table asked me if I’d agree to give the painting to her. It is now hers, and I am happy because it is a strong message from a mom to her kid.

Some things (well… all) are just meant to be, wether we understand them or not… 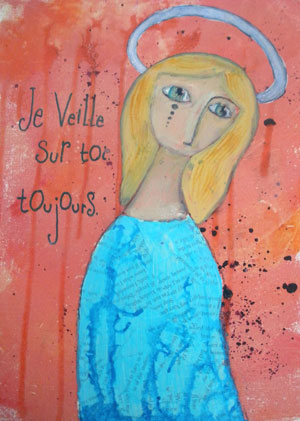 «I am blessed» current painting in progress.

I really have to go back into my regular scheduling in blogging. I have so many things to share but spend so less time on my computer…

Here is the painting I am currently enjoying working on. It is on 9″x12″ canvas board (trying to figure out the best to finally sell some originals as well, without having to ask for expensive shipping fees): 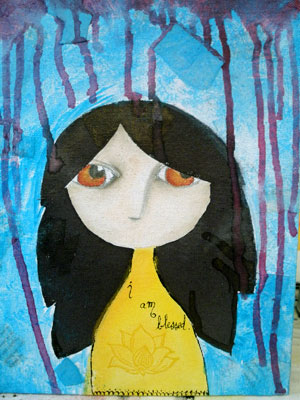 I actually hate the background how it is now. There is something off about it. But is is okay because I will start over and cover it up, will see what happen then ! I learned to love every single step of the creating process, even when I actually don’t like what is happening.
If you look closer, you will see the lotus on her body. We can see it better in reality than on the picture but it is subtle.

I am playing with faces, trying to make them express something. But they are still kind of blah. So I practice. However, I like her.

What are you creating right now ? does not have to be a painting, i would love you to share with me in the comments if you’d like <3

In progress in my studio, shop news etc.

I try to go back to smaller painting supports. It is still part of my BIG and Fearless painting process though. It is weird because when you pull for the first time a huge canvas or paper to paint on it, you are affraid of the big amount of blank space in front of you. But once you get used to it, I find it even harder to express myself on smaller spaces as I used to. Strange !
So for conquiring this uncomfortable feeling, I bought several 11″x14″ canvas boards to play.
Yesterday (monday january 31st) I wanted to get out of my comfort zone regarding my use of colours. I love purple (that is my all time favourite with blue) but noticed that I only use it in tiny amount here and there, so I wanted to play with it in the background.

Here is the result of my afternoon creative playtime from yesterday: 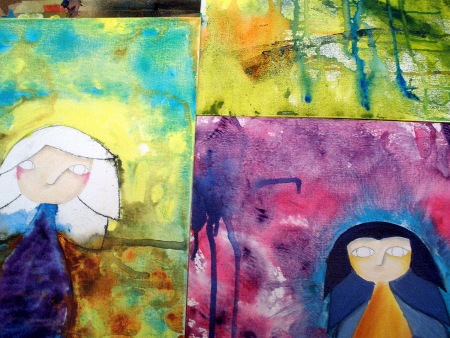 Of course, I have no idea where these will lead me. I am just having fun, trying to pull emotions out of inside. Trying to shake off the pressure I am putting on my shoulders to get my art to the World, to say “hello, I’m there. My name is Nolwenn and I am an artist, you should check my artwork“. It does not happen as planned, I am facing unexpected events that force me to see things differently, to juggle with other ideas. After the frustration, the sadness and (don’t tell anyone) a bit of anger, comes the boost in my butt to move forward no matter what.

Talking of all this, as I told you recently, I will soon open an online shop. You’ll be able to buy beautiful prints of my artworks, and later this year handmade journals (and I think other things that i’ll develop). If you like what I create and want a piece of my World in yours, don’t hesitate 🙂 And if there is a specific artwork you would like a print of, email me 🙂

I am also creating a portfolio so it will be way easier to see what I do !