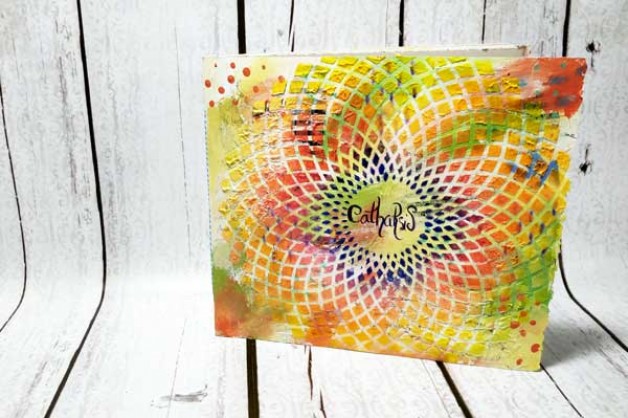 Hey Love Beans ! This week, I wanted to share with you my process to create a colorful cover for the first Art Journal I’ll be using in 2018 (PS: as you’ll see in the video, I use a very easy handmade journal. If you’d like me to cover how I did it with a quick video, tell me in the comments here or on Youtube).

Here is the video:

I truly came back to my first loves: layers. finger painting. texture. colors. This year, I am creating to bring joy back into my life. Last year, I was in a deep creative drought.

After long periods of analysing what I was going through, trying to understand, some few points came up:

My solution was to go back years ago, to the techniques that truly speaks to my Soul and make my Heart sing. This art journal cover embodies all of this.

The products I used: 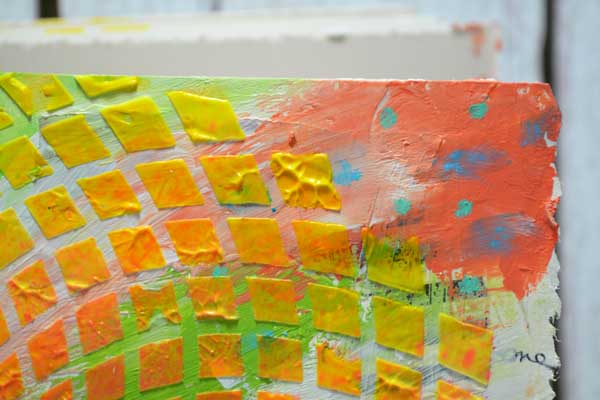 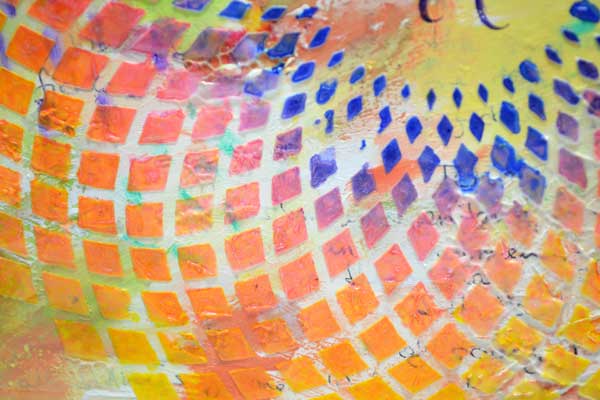 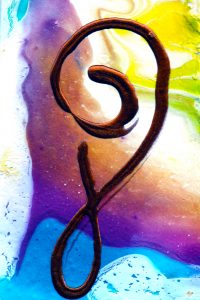 Brrr baby it’s colder and colder outside (we reached the -25C). BUT what is great is how appreciative of the warmth of our home we become.
Christmas holidays will begin next week, and my husband will have some time off so it means one thing: family time !!! Do you have any family traditions during that time of year ? 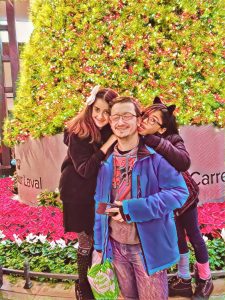 I am writing a blogpost I will push public next wednesday and I keep reading, erasing, re-writing it. It is not an easy blogpost to share but I feel like it’s about time I do. In the meantime, it is essential for my sanity that I take some time each day to make a mental list of what I am grateful for. Either I do this, or I drown myself in my thoughts…

Good sound for your weekend:

Writing here can be difficult. I sometimes, like now, dread putting the words on the screen. Because it means everyone will be able to see them. To potentially judge me for them. But it also means that maybe, someone will recognize herself/himself in these words. This is what keeps me coming back. Sharing my stories. Sharing my art.

I recently put the word “depression” in the outside.

I have never agreed to consult a therapist, even when my Mom begged me to talk to someone when I was a teenager. To me, it was not depression then; I was a melancholic romantic. Obsessed with poems from Charles Baudelaire and Arthur Rimbaud, I was leaving what Baudelaire called ‘The Spleen”. If you are not familiar with it, here is what Wikipedia tells about it:

In French, “spleen” refers to a state of pensive sadness or melancholy. It has been popularized by the poet Charles Baudelaire (1821–1867) but was already used before in particular to the Romantic literature (19th century). The word for the organ is “rate”.

The connection between spleen (the organ) and melancholy (the temperament) comes from the humoral medicine of the ancient Greeks. One of the humours (body fluid) was the black bile, secreted by the spleen organ and associated with melancholy. 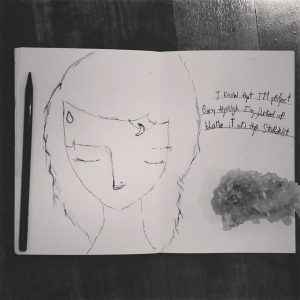 But almost 20 years later, I know I was deeply depressed. Something not many people know is that I almost killed myself once but an higher force kept me alive. Call it God, the Universe, my Higher Self, I don’t care; to me, it was my Aunt who died when I was 9. Depressive thoughts have come and go throughout my life. And right now, I think it is time I put them in the hands of somebody else. I wanted to become a psychoanalyst and started University towards it (see, I am obsessed with the Human mind…). Some days, the fog is so heavy I can barely breathe. I used to have panic attacks, especially when we were living in Paris.

But I found something that could help me heal on my own: writing. sketching. painting. 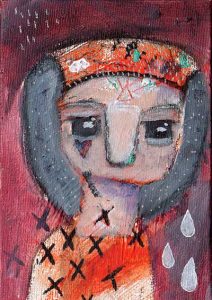 The pain is real. Painting it makes it even more real because then, I can actually see it. Years ago, I started an ongoing painting that I titled “Anger Management”. It is a wood board on which I let it all go when anger takes over. It is better that to kill somebody, right ?

Another way of dealing with intrusive thoughts is to put them all on a canvas/journal, and then cover it up. Make the hurt something beautiful. Burying it all under dozens of beautiful and meaningful layers.

Love is louder. This was one of my mantras this year. Something I repeat to myself over and over until I feel it as a Truth.

How do you deal with shitty thoughts ? I would love to know your own techniques of coping <3

You guys, Winter is really here now in my Montréal suburb town. Last night, the snow was fresh and powdery while falling; walking the dog was actually really enjoyable et magical. 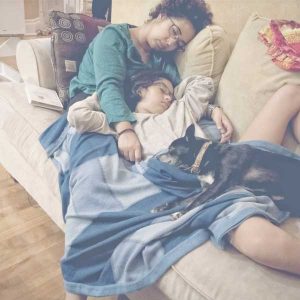 Life has been hard this year, I won’t lie to you. Maybe I will talk to you about it, maybe it will only live in the pages of my journals (written or art journals). December is not the easiest of the 12 months but I decide to make it what I want it to be. My 12 years old daughter is glad we are in December for two reasons: she is now finally allowed to sing Christmas carols and she can start the Lindt Advent calendar gifted by our neighbor.