{Together Forever} New ArtWork for my Mum 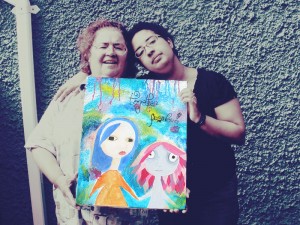 My mum was alone to raise me. And I think she really did a great job, it was not easy; after all.
We have a kind of “fusionnal” relationship but we both know that the other needs some space. I miss her so much since we’re living in Canada; she went to visit us during five weeks this summer and I never thought it will go so fast.
It was her birthday on July 4th, so I wanted to create something meaningful just for her. Something she can look at and think of me. Even if I’m far away geographically. Something that would remind her how much I love her and she’ll always be in my heart, every seconds of every minutes of every day.

I changed it slightly while she was here, before offering it to her. Because the character reprensenting me didn’t have a mouth or a nose, and during 3 weeks she was telling me it was the only thing she didn’t like about my Girls, she didn’t understand why they only have eyes (but I DO know why they don’t) so I added it subtly.

This finished and final one is the third I tried. The two I started before just wasn’t what I was expected. It took me something like a year to really succeed in the idea and design (I don’t know why, maybe i was too attached too it, I put too much pressure on this, so I was blocked).
I wanted it colourful.
I wanted the image to speak for itself.

And when I gave it to her on her birthday, she really liked it, and told me she’ll hang it on her bedroom wall so only her could see it, because it’s between her and me. 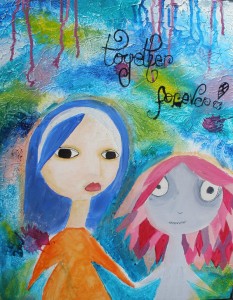 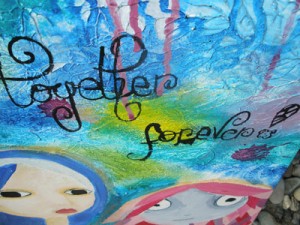 It’s absolutely not perfect, but I like it as it is 🙂