“Unexpected Gift”, the Last and the First

Vancouver dressed up with her white robe during the night… We enjoy it, knowing it will be all gone because of the rain announced to pour for the at least next 14 days -!!!!-.

On December 31st 2010, I started a new artwork… I had no idea what I wanted it to be, just that there has to be an Owl somewhere (the Owl is one of my totem animal).
Since the workshop I attended last September with Jesse Reno, I do my best to let go, to not get too attached with my paintings while creating, to be in the present and not in the “it’s going to be like this and like that and….” as I used to be. It’s not that easy for me, it’s really a new way of approaching my art, my way of thinking about it. I now start with an intention, a idea, knowing deep inside that there are chances it will be totally different eventually. And accepting that it is okay was a breakthrough for me.

2010 really was a determinative year in my creative life. Embracing it, Accepting it, Loving it. 2011 will be the year i’ll put everything in motion, make something real and share with the World. It also will be the year when I won’t be affraid anymore to show how my artwork and my spirituality are linked together and make me who I am. Fearing to be judged, to be misunderstood, kept me away from sharing as much as I wanted to.

So… I started this on December 31st, it was my last artwork of 2010. But as usual, I wasn’t able to achieve in one day so I finished it yesterday, in January 2011. My first finished painting of the year (I don’t coun the Sketchbook Project, which is something else). I love how this artwork is for me the link between two different years.
I see it is kind of different from what i do, but is still me. There is a shift happening… 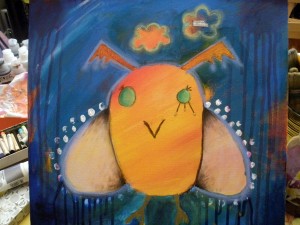 You know I want to add word(s) in my artwork. I wanted something in one of the clouds, no idea what though. I read not very carefully a few pages of the book devoted to collages (bought 50cts at the library book fair last year), until my eyes stopped on something. “Magical and unexpected gift”. Here it was. Perfect ! It’s a small font, so you really have to get close to the canvas to read it, and I actually like it this way. 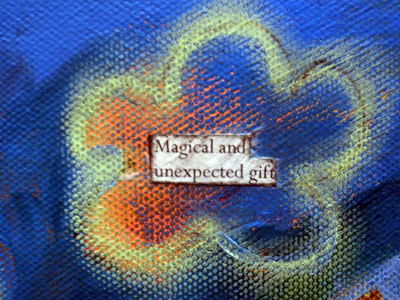 What kind of magical and unexpected gift would you like to receive soon ? Don’t be affraid to go crazy dreaming, you may be surprised by what happens 😉

One Response to “Unexpected Gift”, the Last and the First